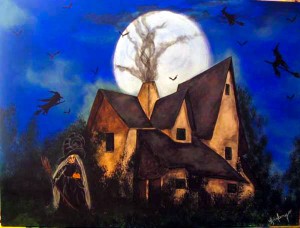 Here’s a little something I wrote a few years back about what I saw one Halloween night.

Ghosts, Goblins, Witches and the whole lot … I also saw cheerleaders and football players.. I saw cowboys and Indians.. I saw a princess or maybe 2.. I saw fairies and angels and firefighters and doctors .. I saw monsters and goblins  and vampires too… and then I looked past the costumes and wow did I see some really cool things. I saw families together having fun, laughing and playing as the night grew dark. I saw the love between mother/father and child… parents that made the night about having fun and being a child. I saw costumes lovingly made .. I saw the patience and time it took for those costumes … made or store bought. There were parents who made sure their child got to be who they wanted on this one day of the year.

Does it really matter in this day and time how this night originated and from which group of people or religion may have started any of it? As it is today .. it’s a collection, an infusion of many backgrounds, many religious beliefs as well as family traditions and lets not forget the media. All of these things have made it what it is today and now it is up to you, each individual to make it what YOU want it to be.

For the most part I saw Halloween night being one of family love and harmony… there was no fussing about what gifts to give or buy… there was no bickering about whose house to go to for you go to all of them. There was no dollar amounts being brought up and it wasn’t even about who had the most expensive costume.  At this time of year, on this night… better doesn’t always mean more expensive!

To me as a child Halloween was far better than Christmas! There was nothing I had to worry about except how I dressed.. and I could be anything in the world I wanted to be this night and no one would say how ridiculous… because the more ridiculous the better it seemed to be.

Halloween to me is the true meaning of being a kid… allowing your imagination take over and then there’s the CANDY!!!! It can’t get any better than that!

Be sure to check out my Facebook Page for more videos, Spirit messages and free readings even!